The Cotillion Brigade: A Novel of the Civil War and the Most Famous Female Militia in American History 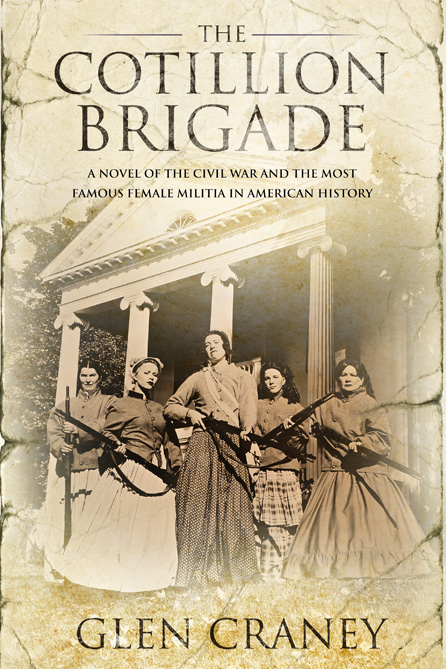 Georgia burns.
Sherman’s Yankees are closing in.
Will the women of LaGrange run or fight?

Based on the true story of the celebrated Nancy Hart Rifles, The Cotillion Brigade is a sweeping epic of the Civil War’s ravages on family and love, the resilient bonds of sisterhood amid devastation, and the miracle of reconciliation between bitter enemies.

“Gone With The Wind meets A League Of Their Own.”

1856. Sixteen-year-old Nannie Colquitt Hill makes her debut in the antebellum society of the Chattahoochee River plantations. A thousand miles to the north, a Wisconsin farm boy, Hugh LaGrange, joins an Abolitionist crusade to ban slavery in Bleeding Kansas.

Five years later, secession and total war against the homefronts of Dixie hurl them toward a confrontation unrivaled in American history.

Nannie defies the traditions of Southern gentility by forming a women’s militia and drilling it four long years to prepare for battle. With their men dead, wounded, or retreating with the Confederate armies, only Captain Nannie and her Fighting Nancies stand between their beloved homes and the Yankee torches.

Hardened into a slashing Union cavalry colonel, Hugh duels Rebel generals Joseph Wheeler and Nathan Bedford Forrest across Tennessee and Alabama. As the war churns to a bloody climax, he is ordered to drive a burning stake deep into the heart of the Confederacy.

Yet one Georgia town—which by mocking coincidence bears Hugh’s last name—stands defiant in his path.

Read the remarkable story of the Southern women who formed America’s most famous female militia and the Union officer whose life they changed forever.