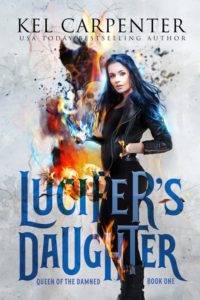 “I wrote and published a series in a very hot genre that was doing pretty well. I could consistently hover right around the edge of all the top sellers in the genre, but for some reason, I couldn’t break it. New books would release and they would do phenomenal, but the first book in series wasn’t seeing any kind of boost. This was an indication to me that it might be the covers. After talking with readers and other writers, I became pretty sure that it was the covers. They were good, but they weren’t “WOW”. They didn’t stand out. I came to Fi and told her this. I gave her all the series’ information, and we talked, when she came back to me with his idea. She called it an “experiment” because it was different from everything else still on the market. It hit the tropes, but it stood out in good way because it was unique. Well, within 24 hours of uploading that cover along with the following two I saw an instant difference. Rank went up. Sales went up. My income so far has shown to nearly double. I attribute this to the phenomenal covers that Fiona made me for my series. Book three is releasing next month and I’m on track to be a six figure author once this book drops. If you’re looking for high quality custom covers that are unique and will stand out in a sea of generic and over done—look no further!